Everybody keeps in mind the Dirtyc0w Linux kernel bug. For those who don’t, take some time to refresh your memory here. The kernel race condition is triggered from user-space and can easily lead a random local user to write into any root owned file.

In this article, we will demonstrate how REVEN can help reverse engineering a kernel bug such as Dirtyc0w. Our starting point will be a REVEN scenario recording of an occurence of the bug, together with the corresponding execution trace generated by REVEN. From that point on, we will:

The REVEN technology used throughout the article has been designed by Tetrane to perform deterministic analysis of whole running systems at the CPU, Memory, Device level. Its implementation comprises a REVEN server together with the Axion client GUI. One can also interact with the REVEN server through the REVEN Python API, from Python or third-party tools such as IDA-Pro, Kd/Windbg, GDB, Wireshark, etc.

The exploit POC we’ll use

You can find the source code of the Dirtyc0w POC I’ve used here. In short the big picture is:

Looking for some point to start in the trace

First, let’s have a look at the framebuffer at the beginning of the trace. To do this, we use the timeline widget at the bottom of the screen in Axion, placing the red dot (current position) at the full left. The framebuffer (Menu Windows->Views->Framebuffer) is quite empty: 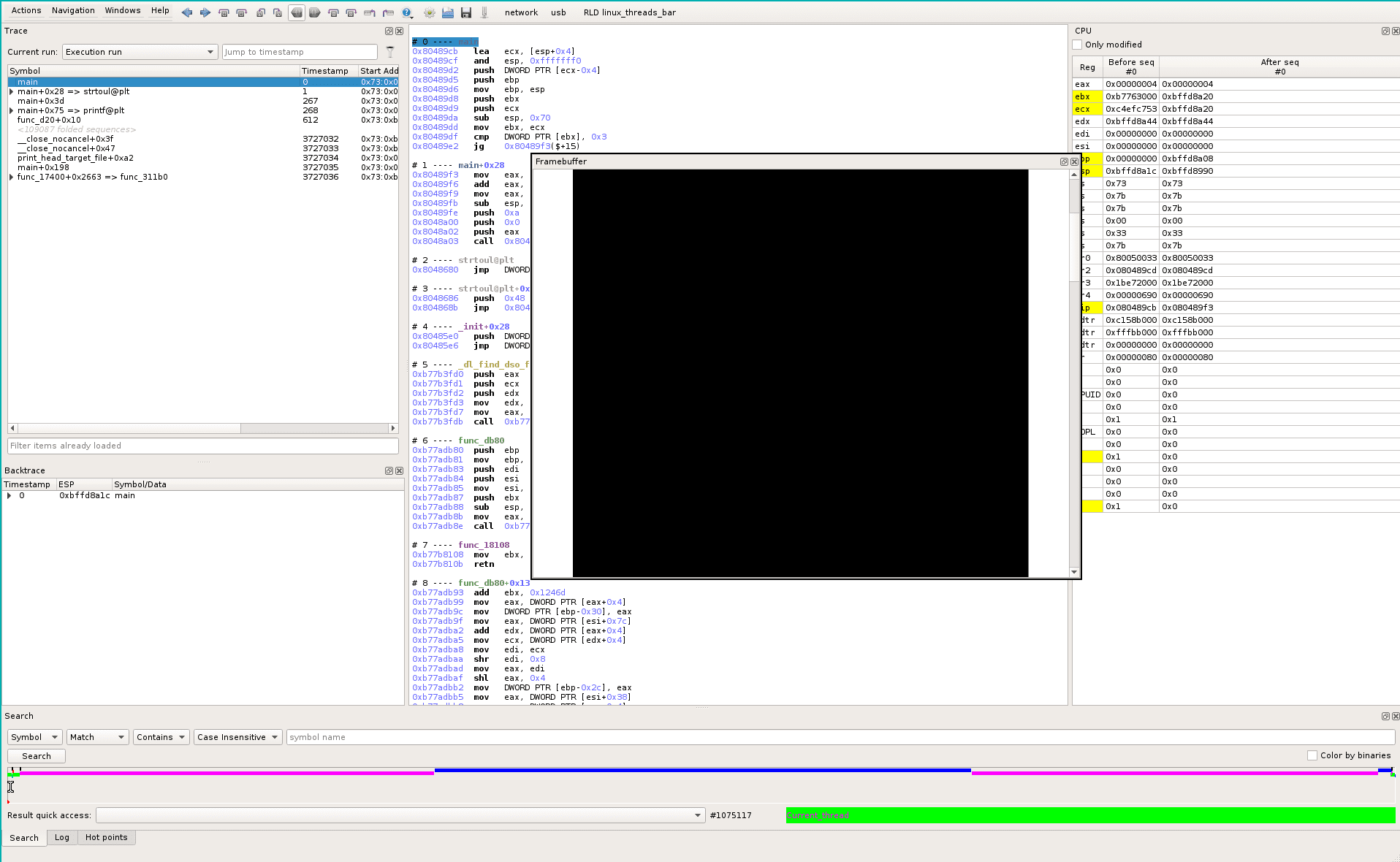 Now at the end (red dot at full right): we see that the content of the file /etc/issue.net is modified: from “Debian GNU/Linux 8” at the beginning, it becomes “_TETRANE_REVEN_DIRT” at the end. So, the recorded scenario and the trace generated by the REVEN simulator successfully captured the race condition that overwrites, from a standard user account, some root-only writable file: 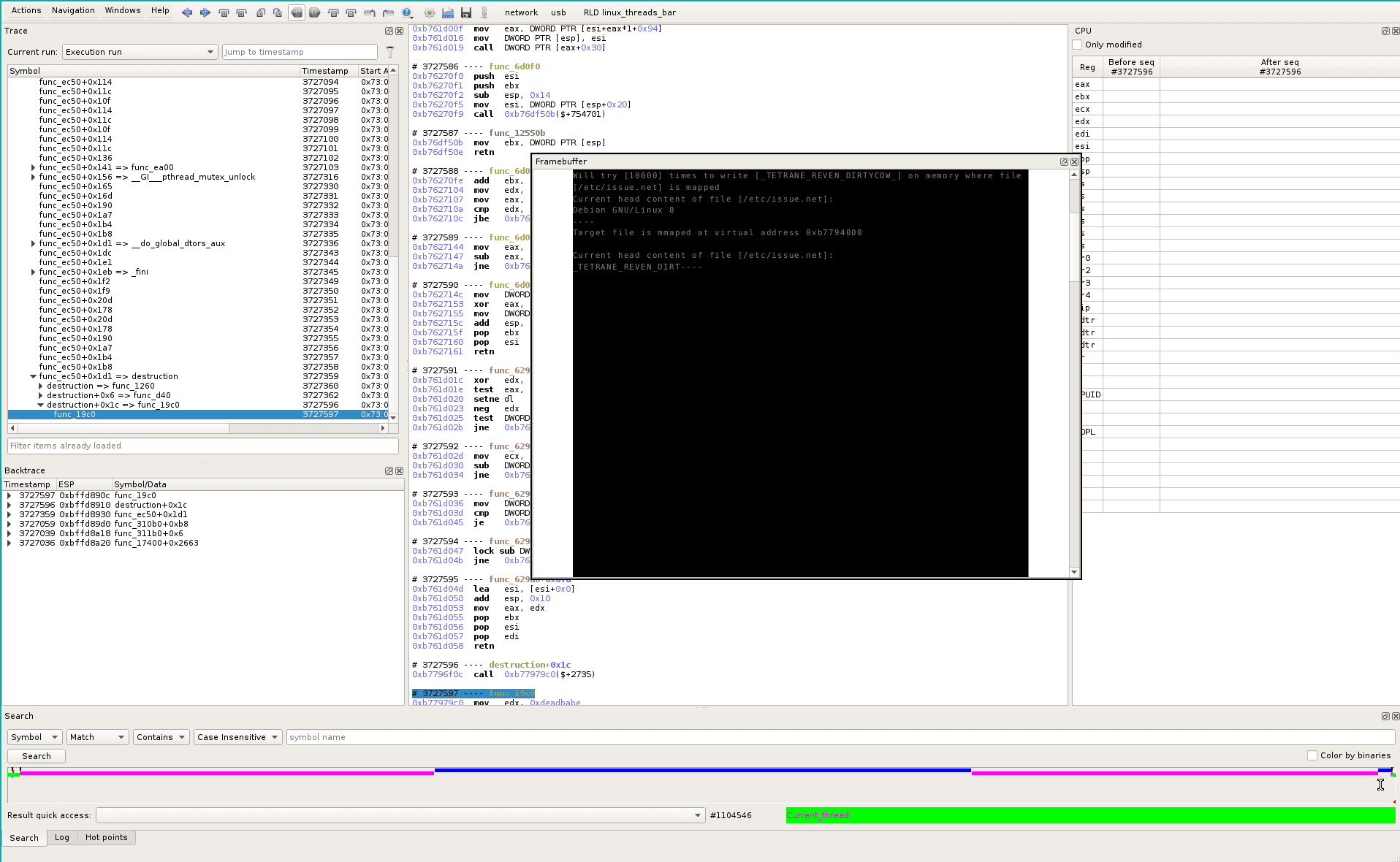 We now want to track the string “_TETRANE_REVEN_DIRT” backward in the trace. To do so, we open the REVEN-Axion Strings widget (Menu Windows->Views->Strings or shortcut alt-s), and look at the following string history: 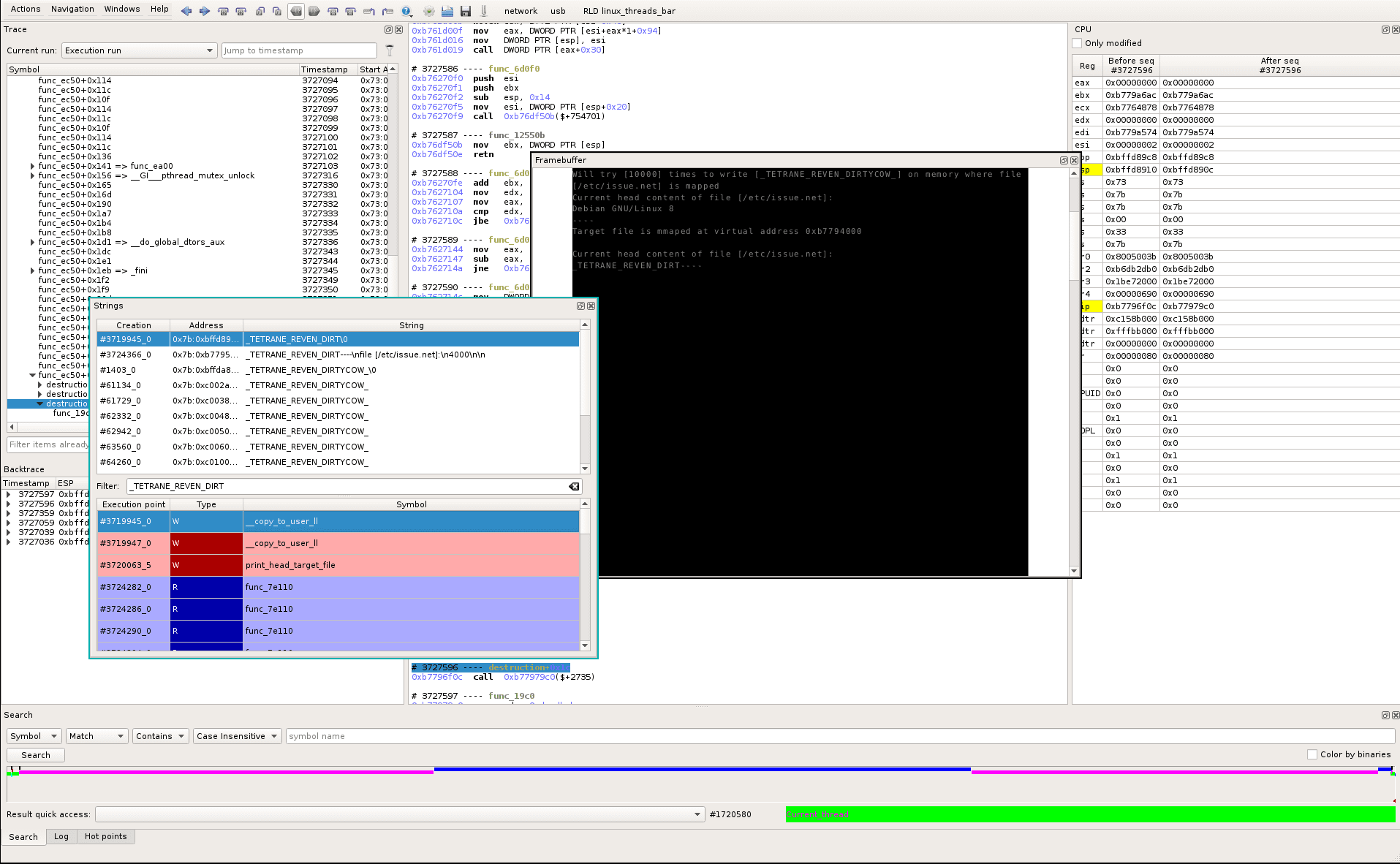 We select the first string access (timestamp #3719945_0), that brings us to the related location in the recorded trace. From the Backtrace widget and the timeline, we derive that this location displays the content of the file at the end of the trace (print_head_target_file() and red dot in timeline). 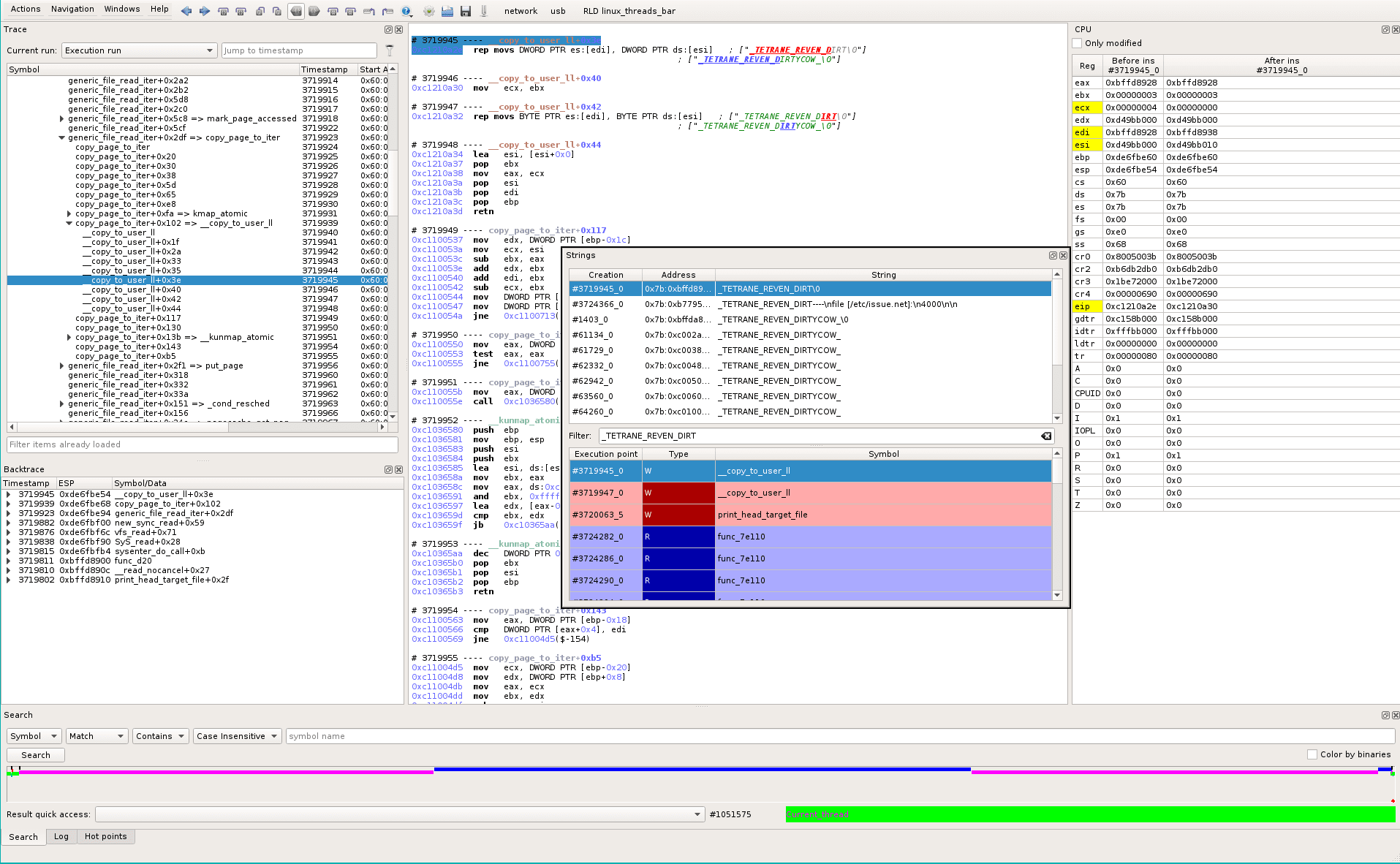 So we look at the input buffer (ds:[esi]) (see tooltip when selecting the parameter): 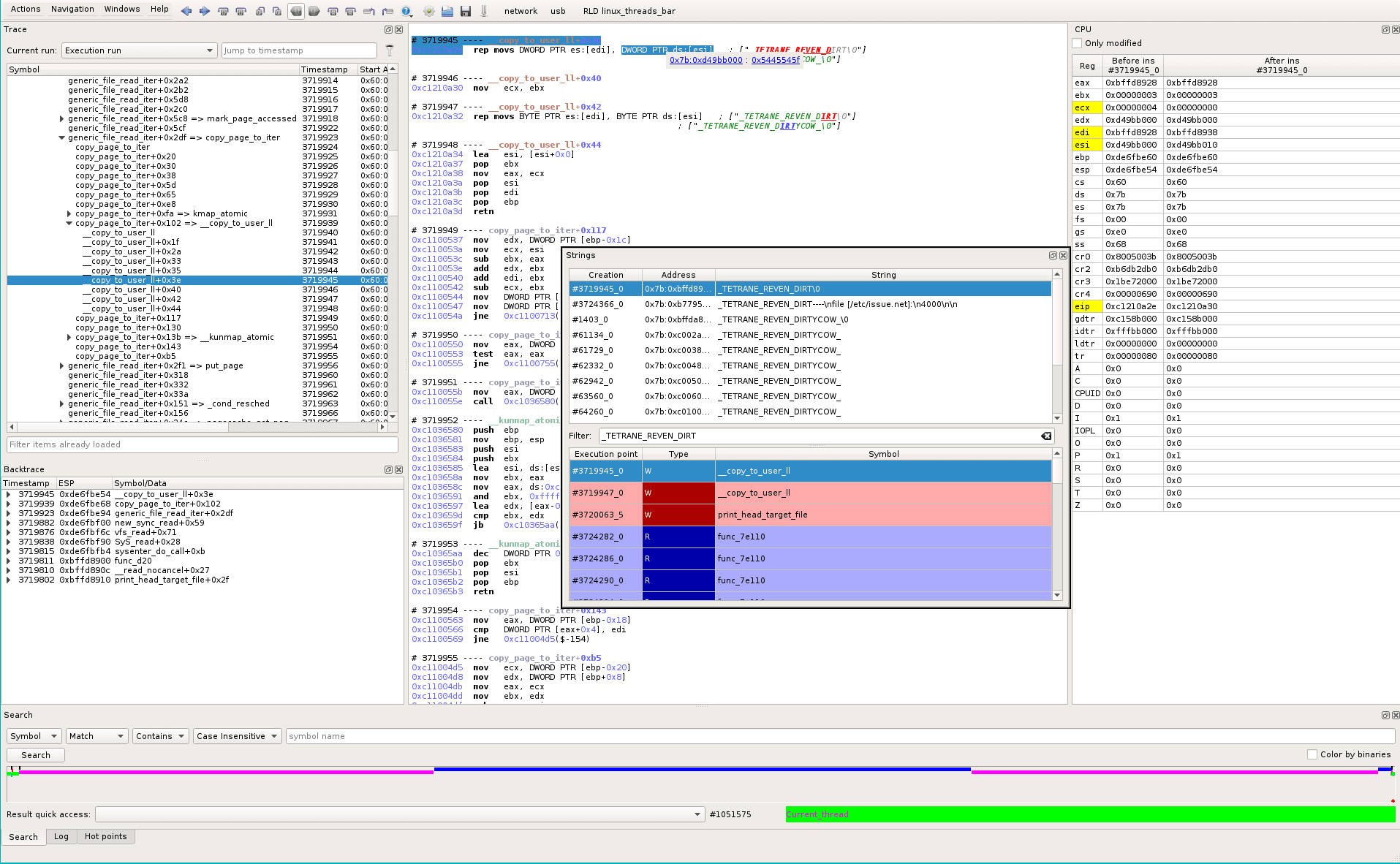 It opens a memory dump widget for this pointer, at this trace location: 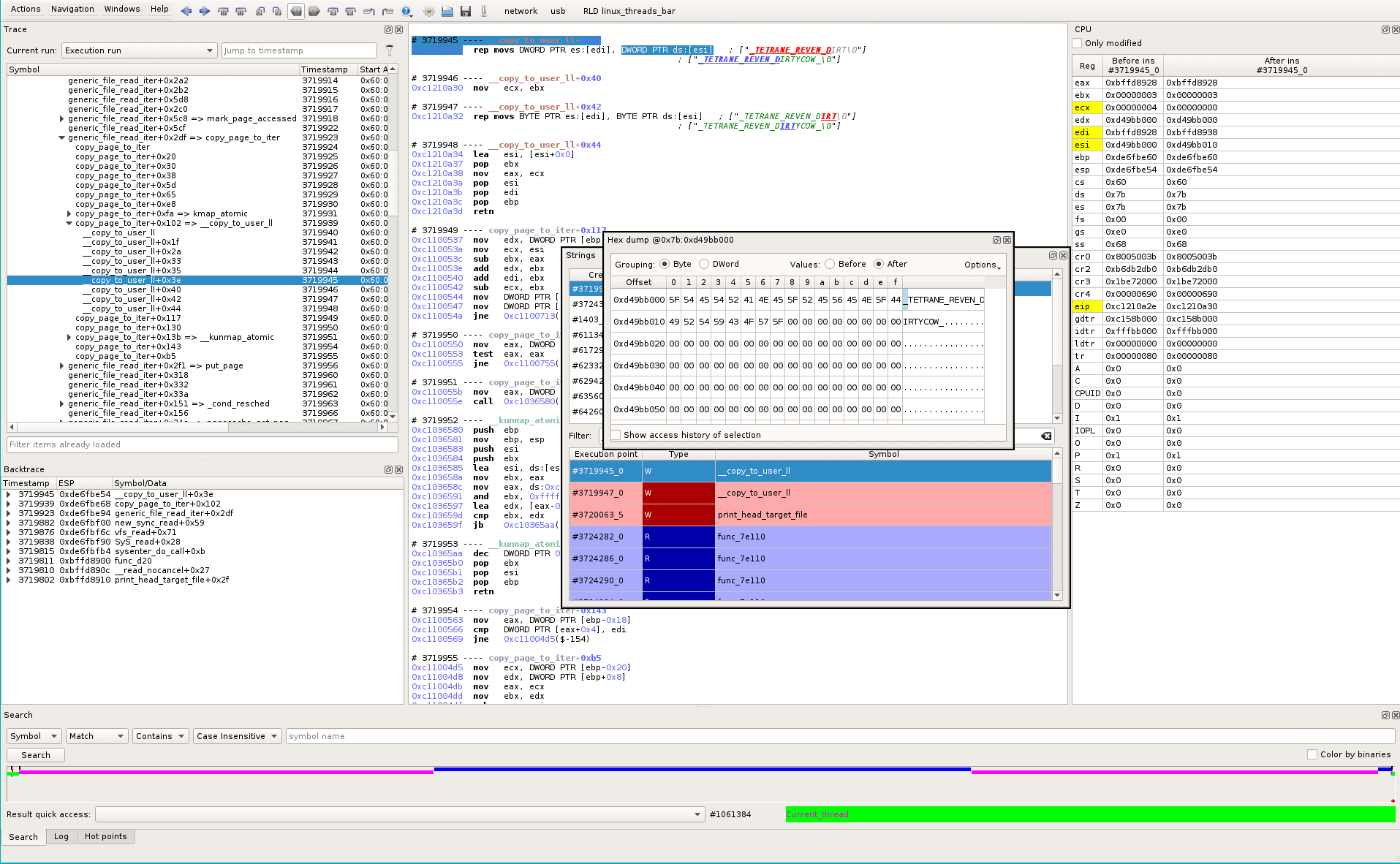 We select the first byte and look at the data history (REVEN-Axion has a database of every memory access for the whole trace). We see that the physical memory pointed to by this virtual address (0x7b:0xd49bb000) is only accessed a few times. First accesses come from a hardware peripheral (“PCI direct access” at early timestamp #13655_2): 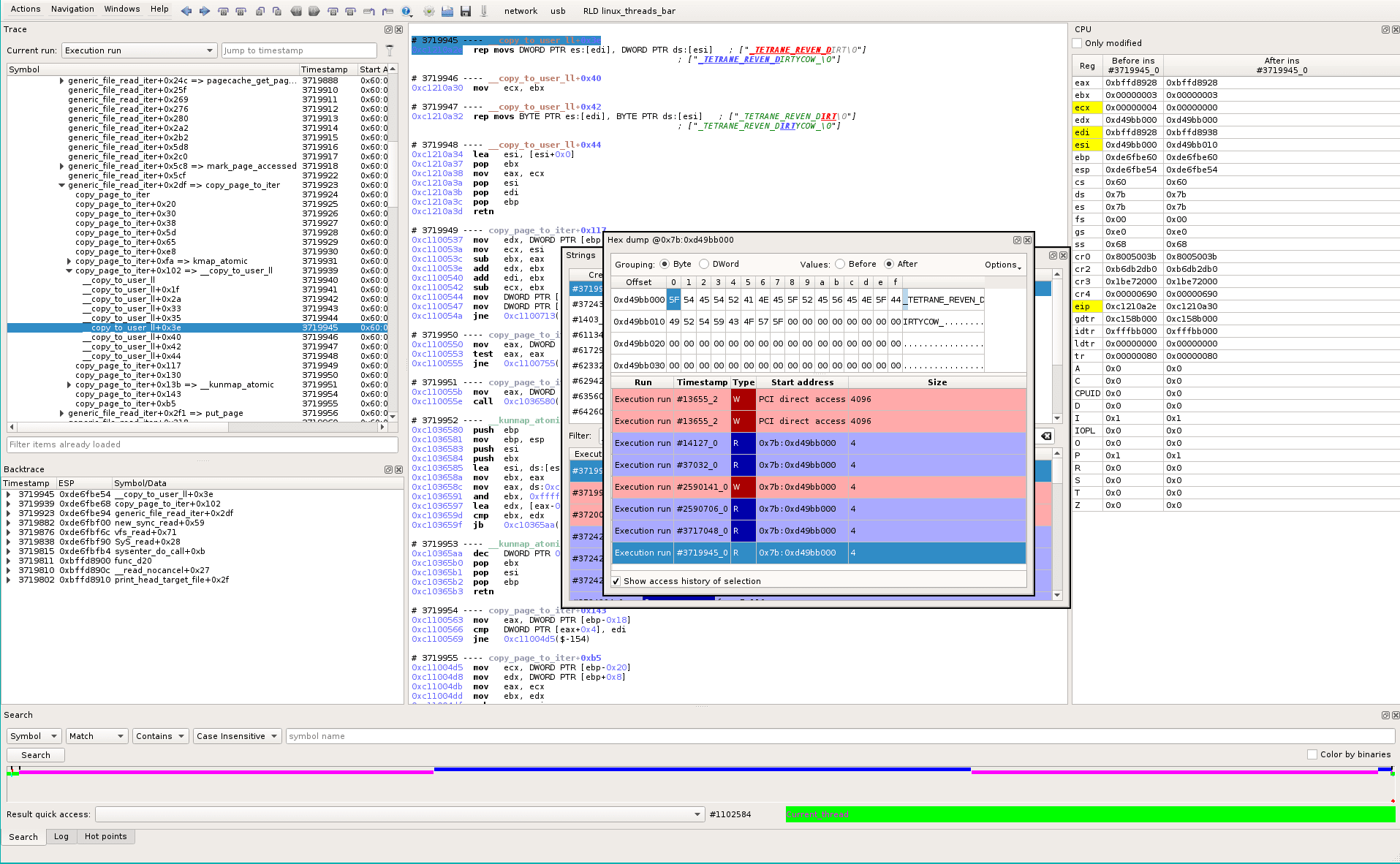 We select the first write in the Data History widget, which brings us to the related trace location. We can see that the write is the first access to disk to read the file (see the content is “Debian GNU/Linux 8”). The main process was waiting for this IO and scheduled an idling process: 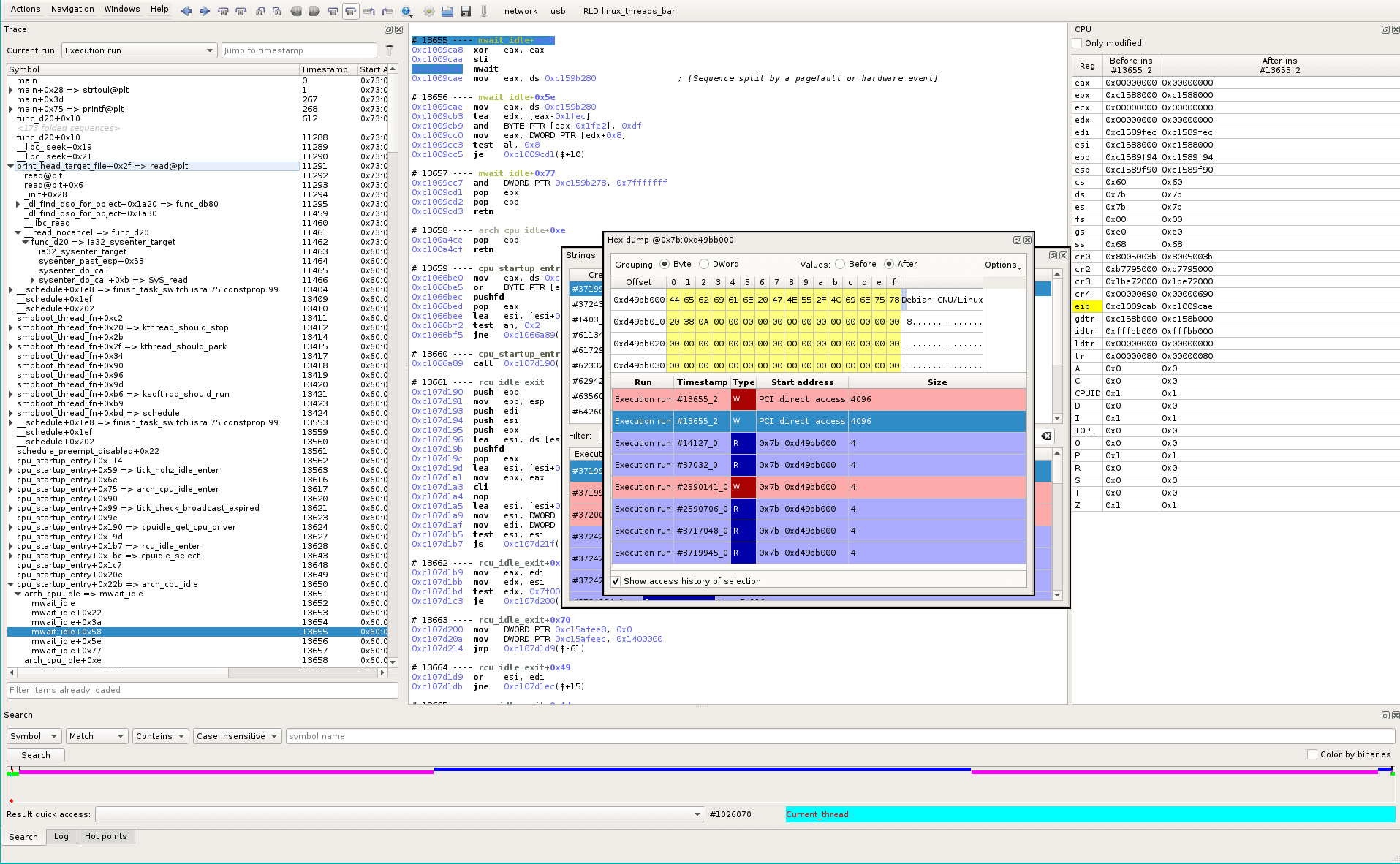 But the current topic is not about asynchronous IO in Linux (even though it is very interesting in fact!), let’s keep it for another time ;).

Find the race condition location in the trace

So we know we have here the file kernel cache buffer, located at 0x7b:0xd49bb000. And we see that we’re writing in it at sequence #2590141_0 in the trace. Let’s go there. We see (yellow in the dump) that the current instruction is changing data in our beloved buffer. We can check with the before/after buttons in the Memory dump that we are overwriting the buffer content for the first time. On the left, in the Hierarchical trace, we see that there is a __schedule from madviseThread few timestamps before. At the bottom of the screen, in the timeline, we see the current location (red dot) and we see that we’ve just resumed the magenta thread. 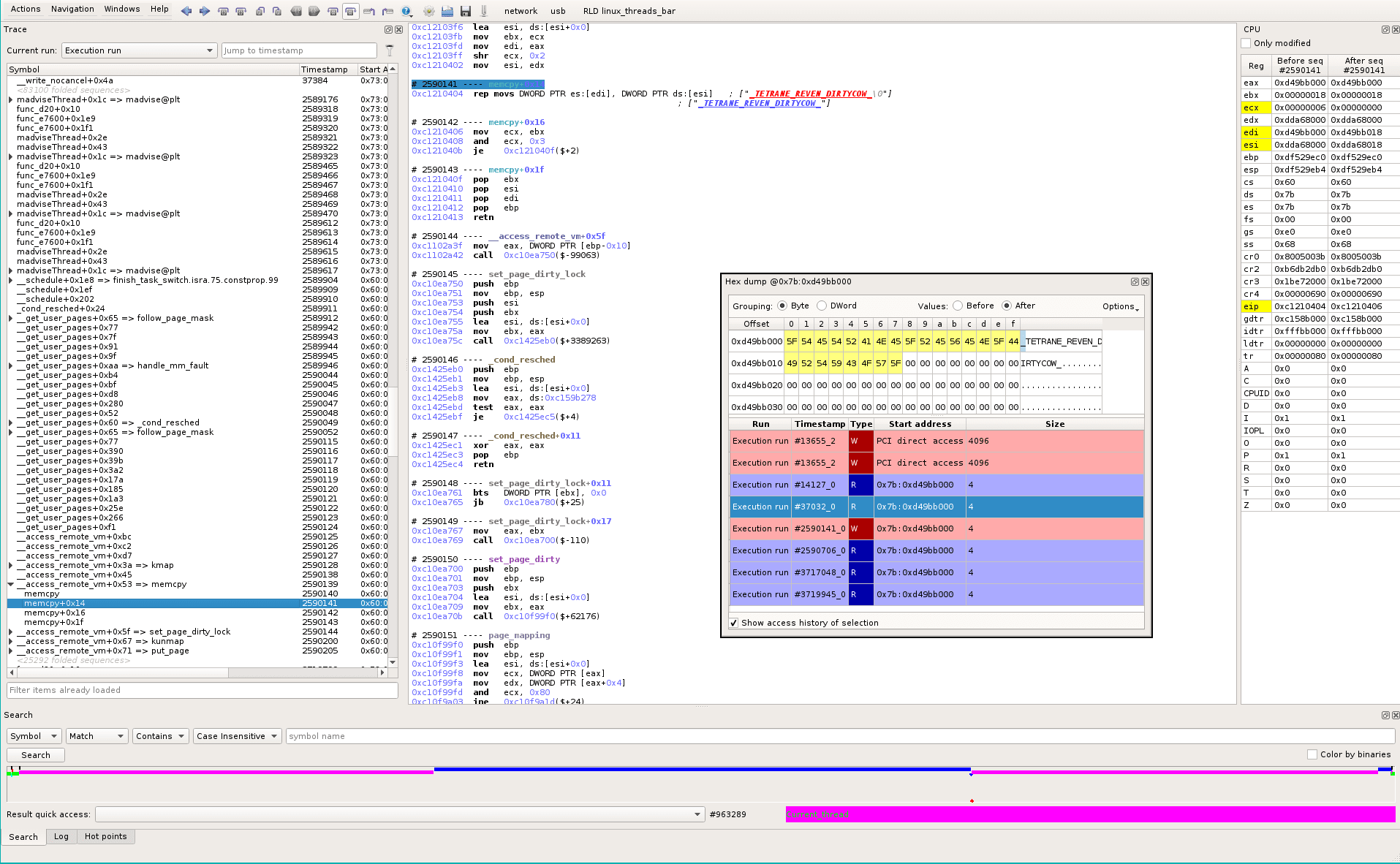 If we go back to where the thread was interrupted, we can see the full backtrace. Axion makes it easy: from the current sequence point, scroll-up, find the end of __get_user_pages (#2590124). Pressing ‘%’ automatically finds the matching “call” of the selected “ret”. It brings us to sequence #1148384 (before the magenta thread was scheduled-out). Here we have the complete backtrace : procselfmemThread->write->mem_write->mem_rw->access_remote_vm->__access_remote_vm 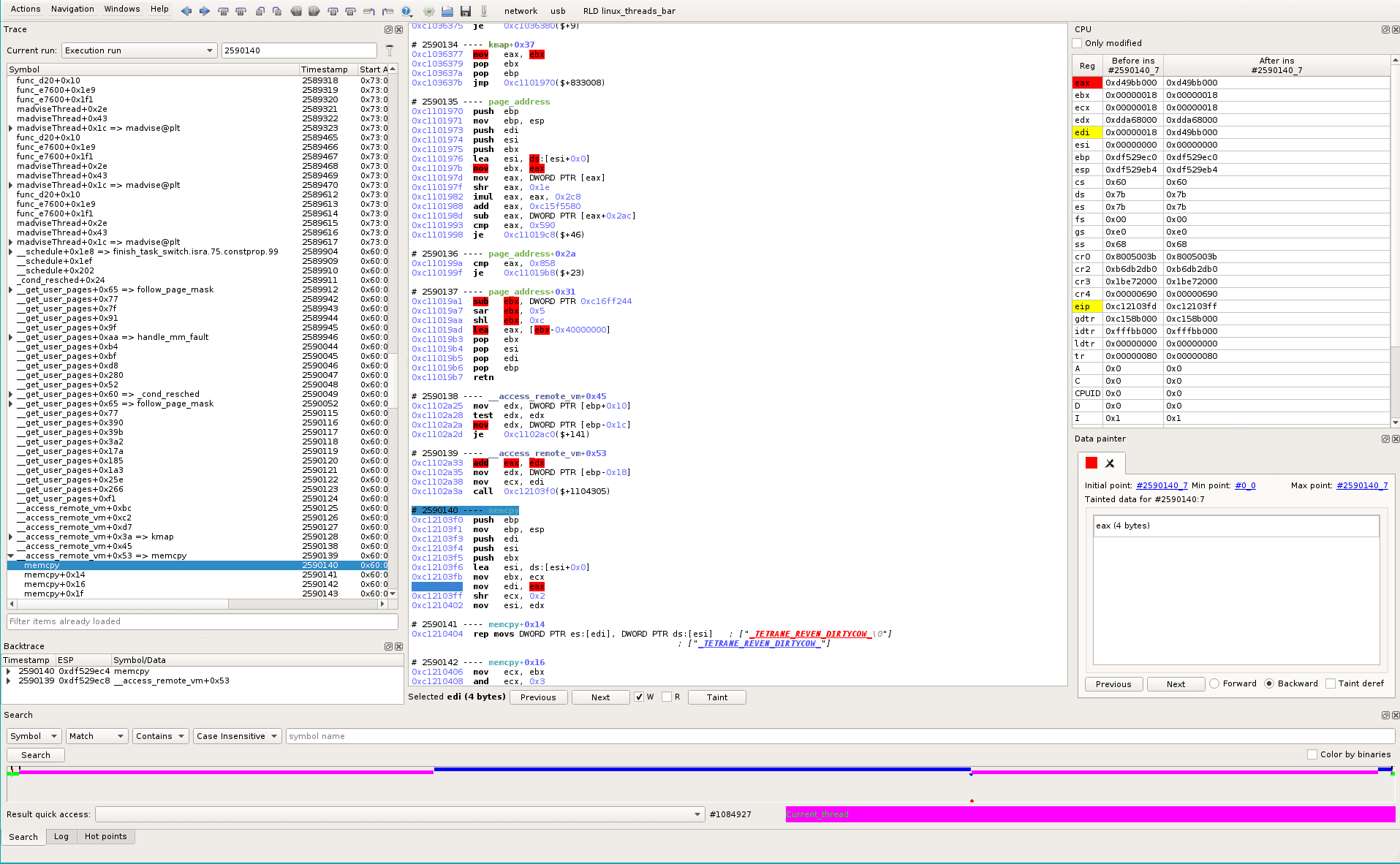 Clicking the Taint button and Backward in the Data Painter pane highlights the backward taint in the trace, which contains too many things when we scroll-up a little. So, from the same start point, we use the Tainter Graph instead (Windows->Miscellaneous->Tainter Graph), that helps to interactively follow the data and discard pointers paths. 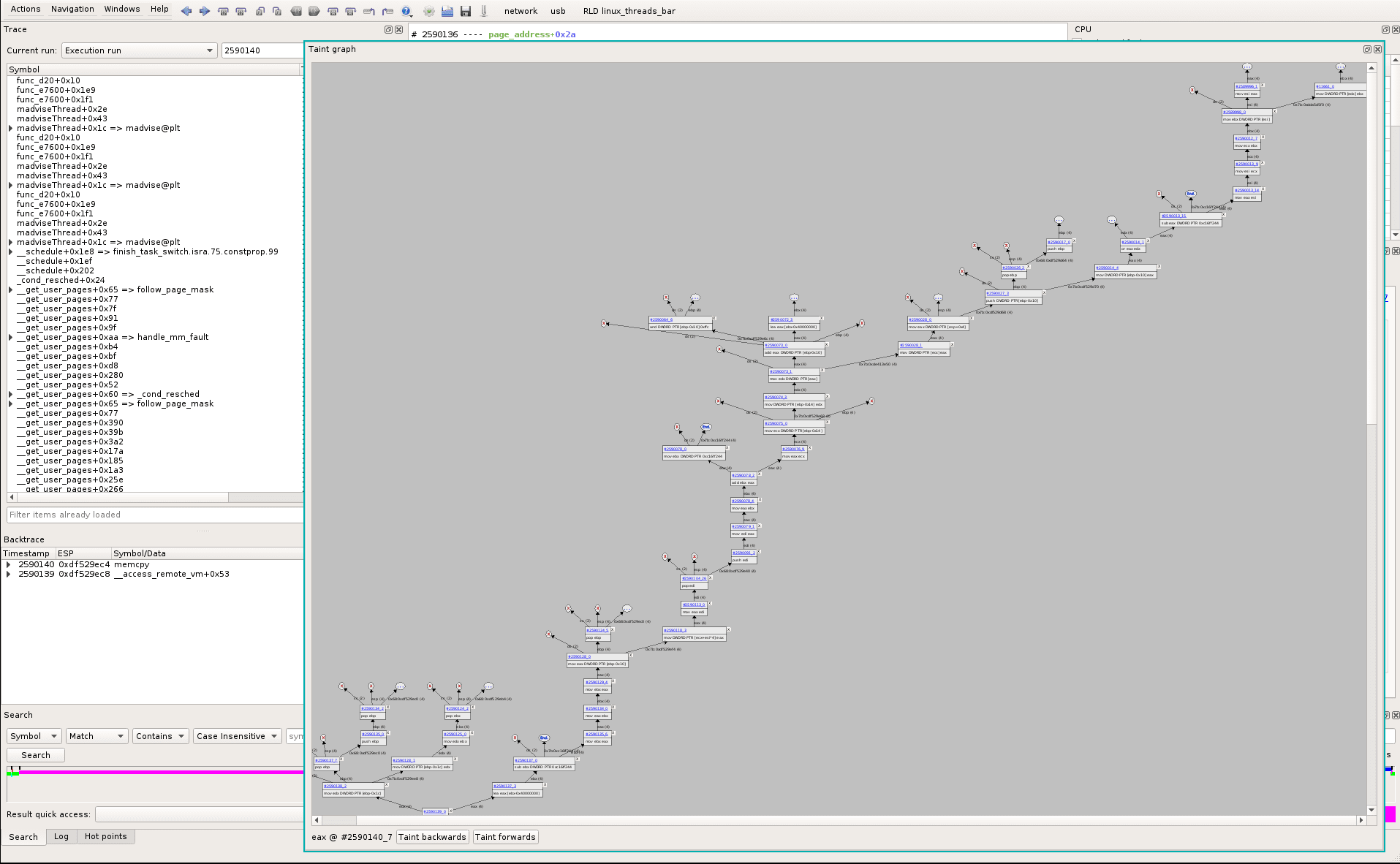 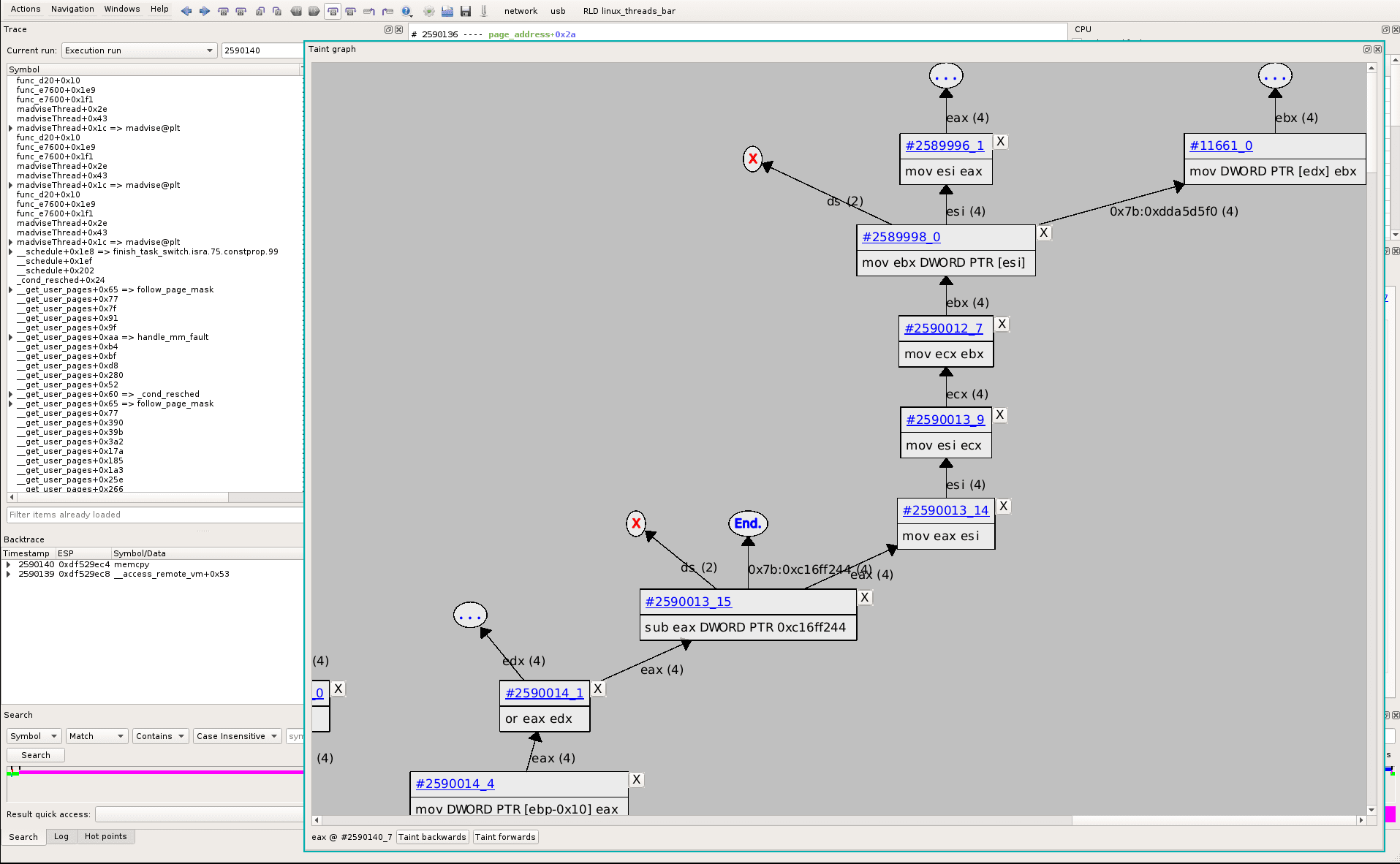 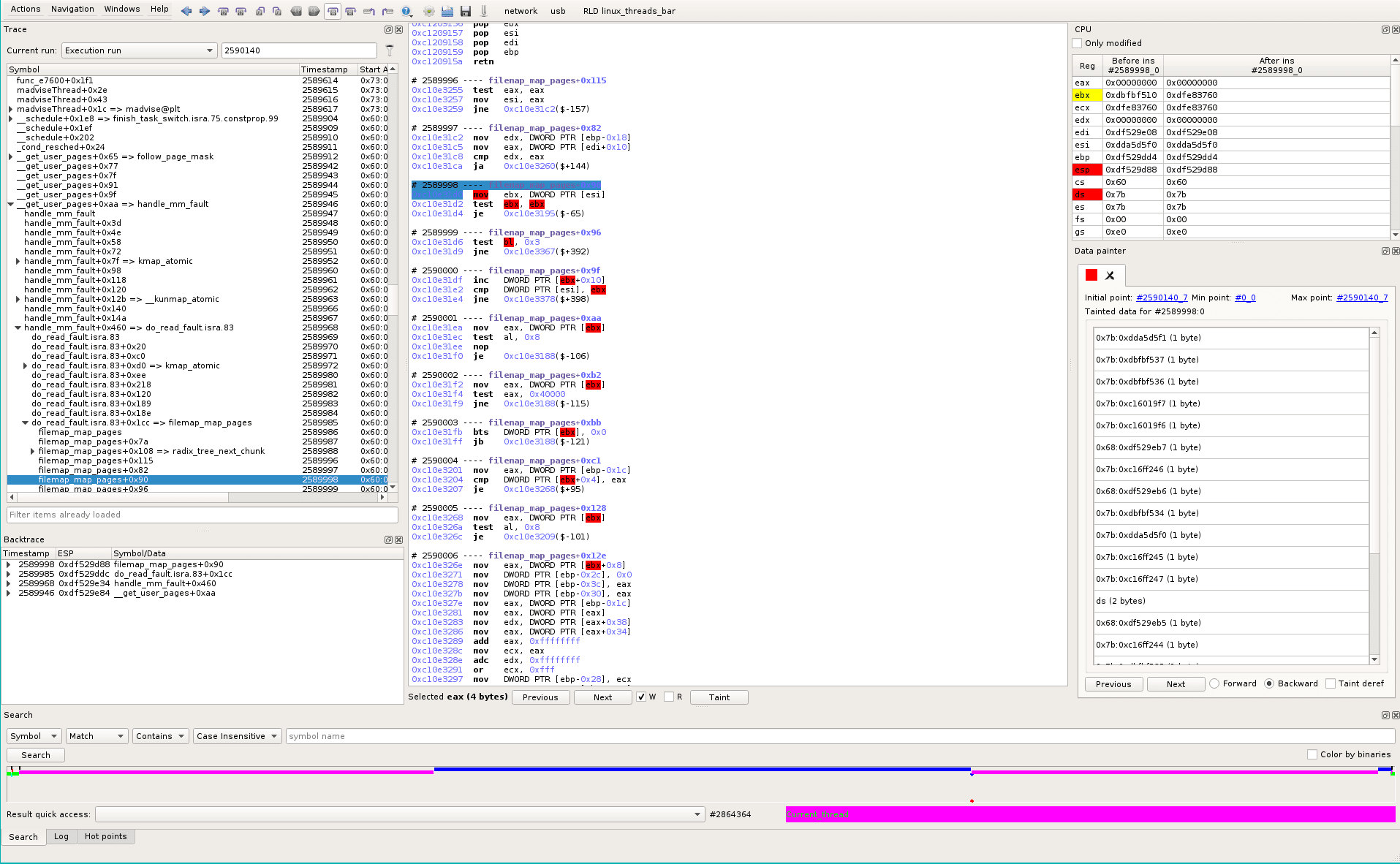 Searching for this eip address (0xc10e31d0) in the trace, we see we only went there once in the whole trace (see in the search widget at the bottom of the screen, search results are shown as vertical bars in the timeline): 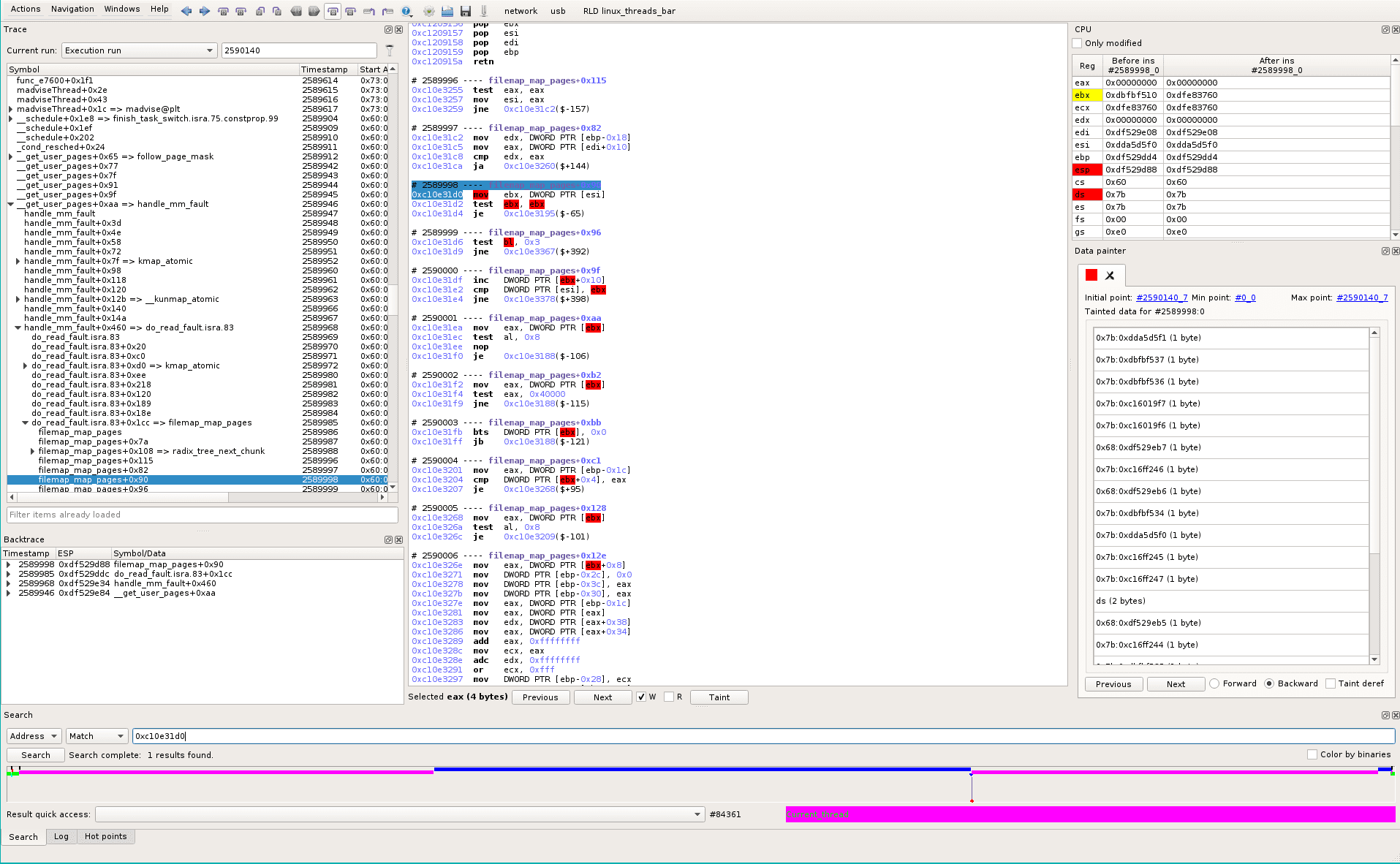 Same search for do_read_fault (0xc1105040) returns only one occurence in the trace.

-> cool, it seems a test in there is the cause of the unique behavior we’re investigating \o/ 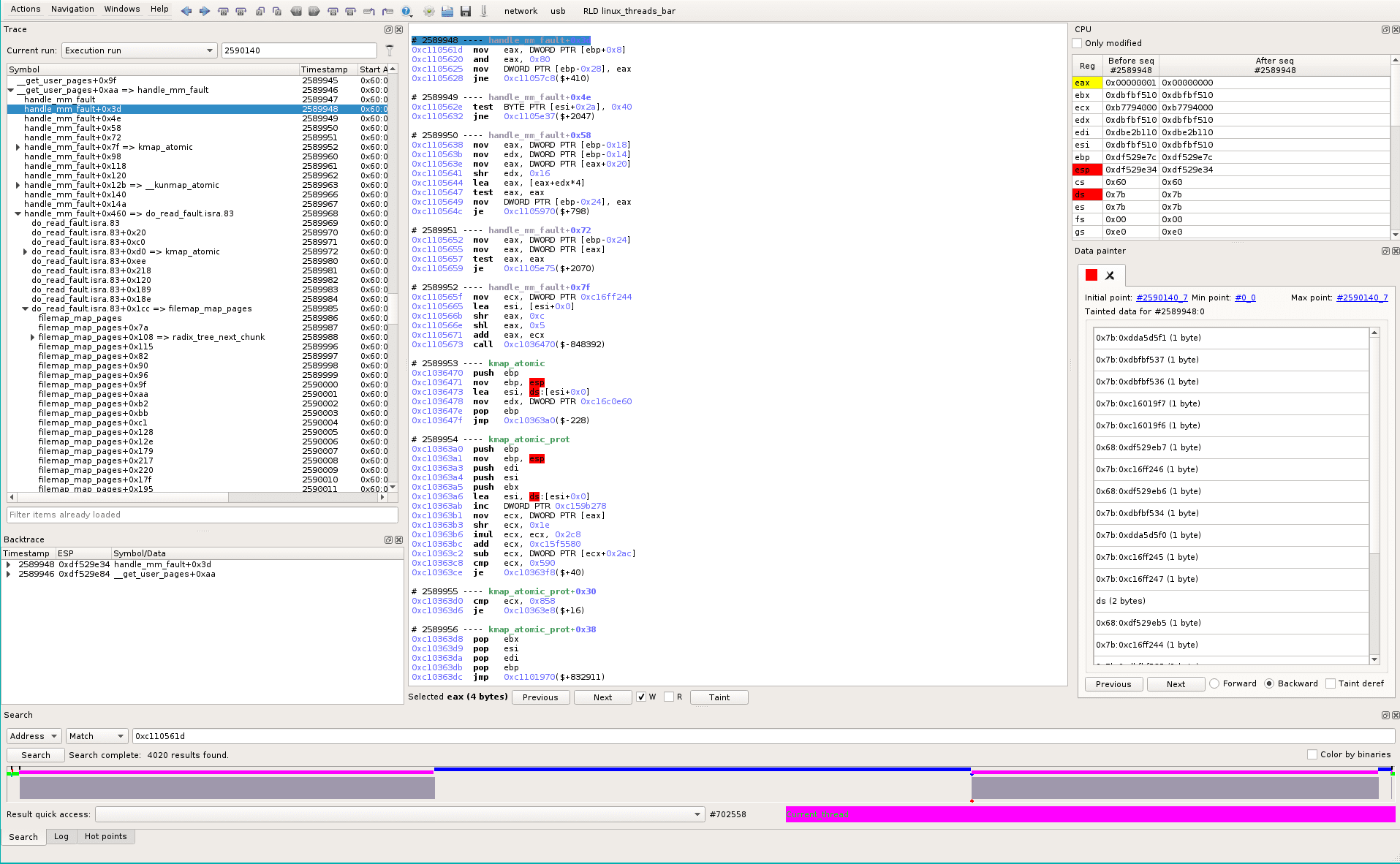 We search for the conditional jump that is only taken once:

So we taint this ebx for backward analysis (see green track). 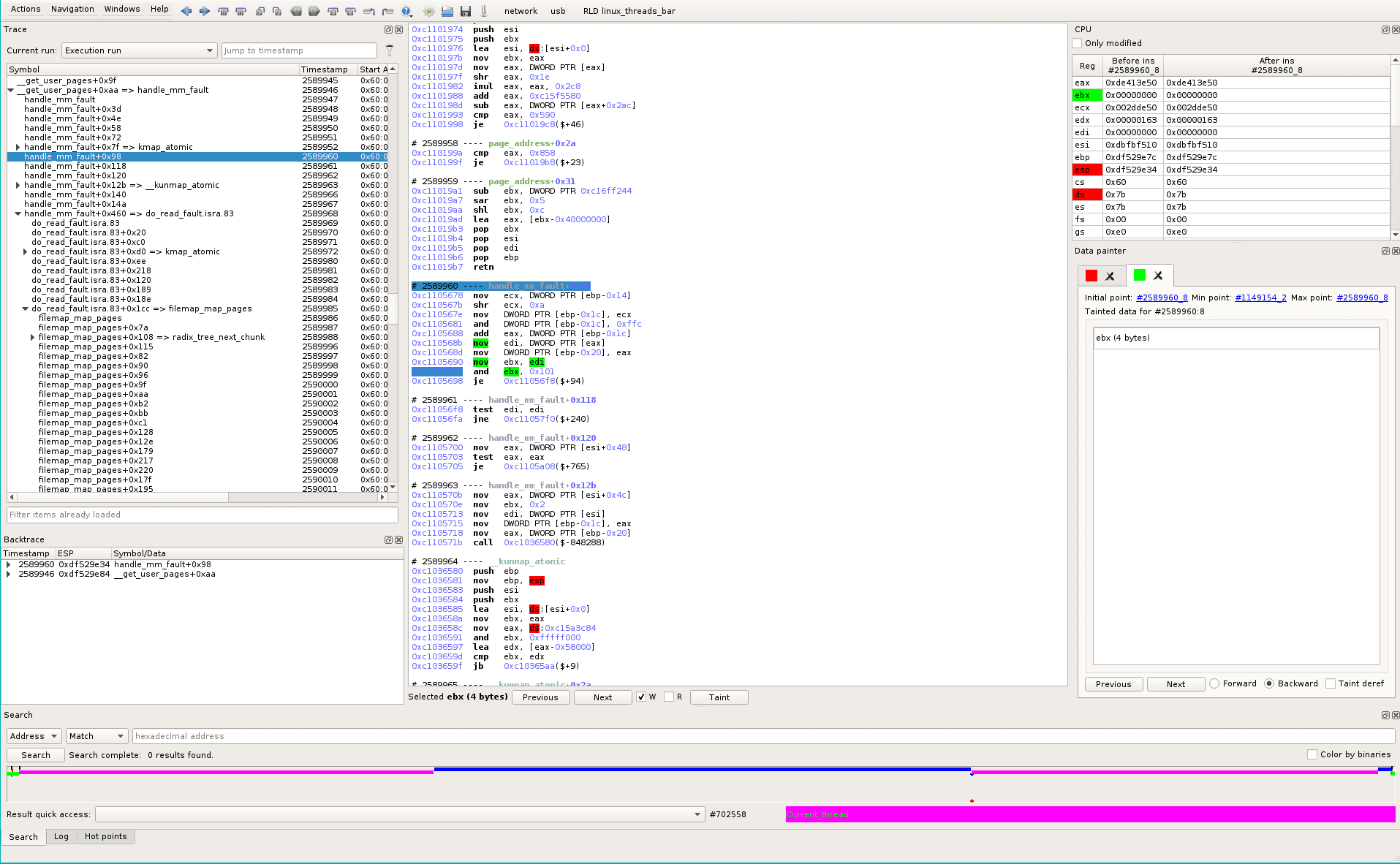 It is straightforward: in the Data Painter widget, green track, click on Min point #1149154_2 that will time-travel when the taint becomes empty. In the assembly view, we see our tainted memory is set to zero at #1149154_3, so the tainter successfully brought us at the right position in time. 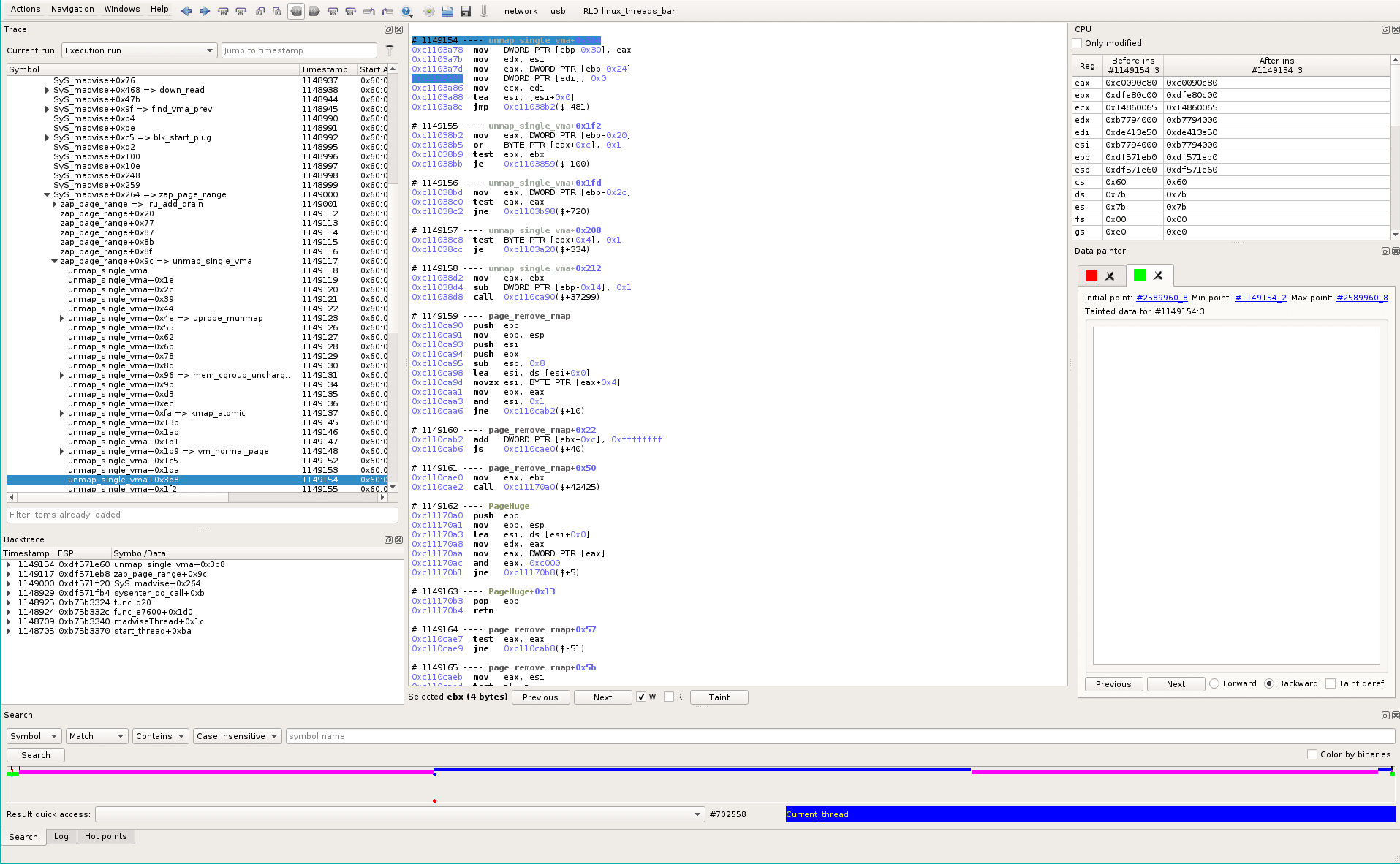 At this point we are in the Blue thread, at the very beginning of the thread, the backtrace is: madviseThread->syscall->zap_page_range->unmap_single_vma

We’ve found that in the magenta thread, a data (at 0x7b:0xde413e50) is written then read. Between the write and the read, the blue thread has overwritten this data at #1149154_3. The data was used by the following instruction that will lead to a conditional jump: should we use the copied buffer (normal case) or the original one (i.e. the real file cache)?

So, if we sum up what we have:

(Please note that this is easy to show live, but trickier to explain in screenshots/text. This article is already too long, so here is the fast summary :) )

We use the REVEN static vision of the dynamic execution to see statically what was executed around our interesting code.

A cool feature is that when you move your mouse over the trace, the graph highlights its related blocks. So you can follow interactively the dynamic code under your mouse in the static view. In this view, only code that is executed at less once in the trace is displayed. So you are not polluted by code you don’t want to see. 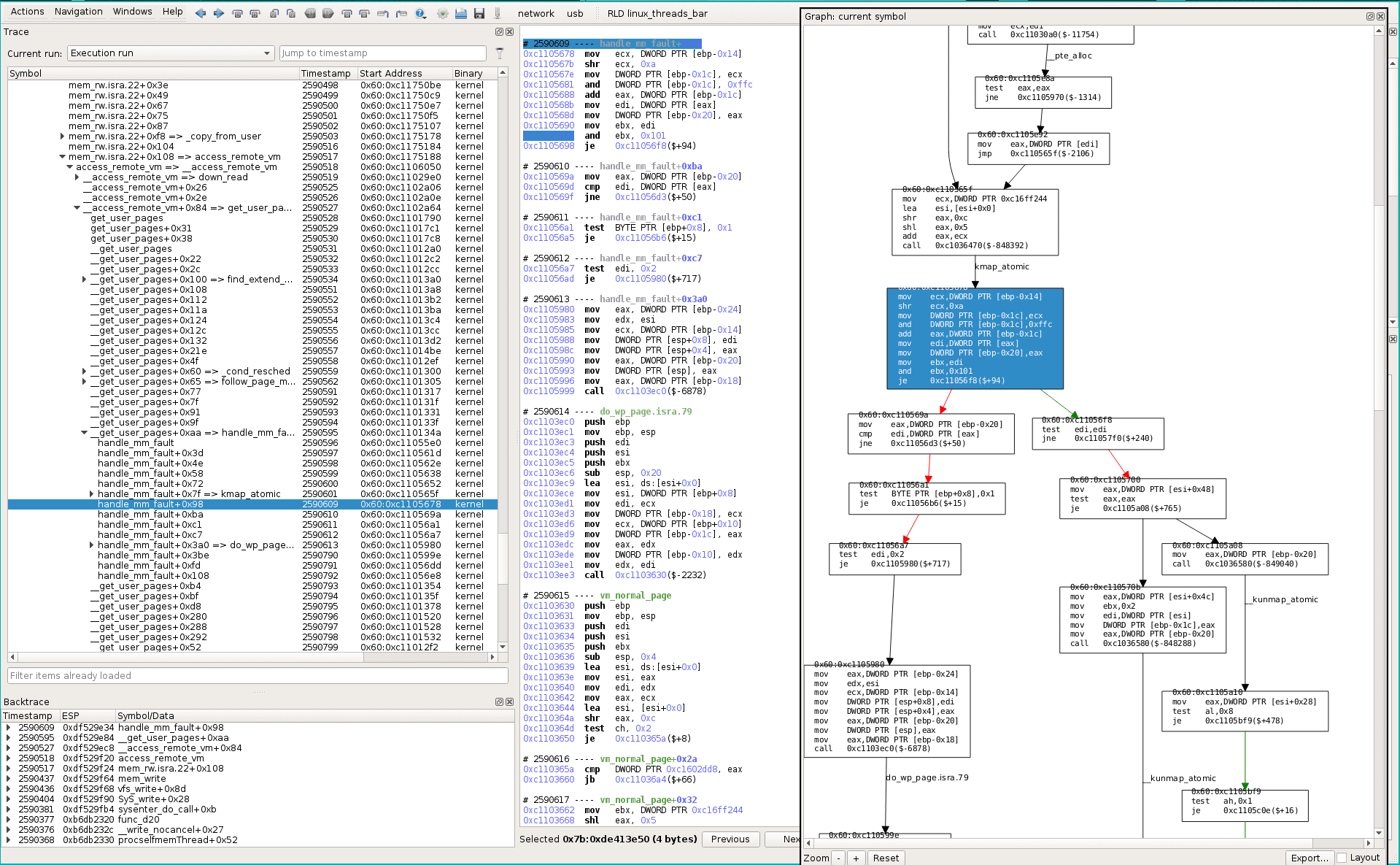 Now, a very quick comparison of Linux source code (some greps with symbols found in the static graph) and executed binaries makes us discover the matching line in Linux => mm/memory.c:3199 if (!pte_present(entry))

(a lot of functions are inlined, so the matching require some linux kernel habits ;) )

In REVEN, we have tainted ebx backward, saw that it is reset by madvise(), which overrides value initially set by the first do_cow_fault. Flags value was 0x65 then.

With 0x65 instead of 0x0, the ebx&0x101 (i.e. pte_present(entry)) would have returned true, and we would have taken the do_wp_page() (write-protection fault, that would have copied the page as usual) instead of the do_linear_fault() (that gives access to page containing the file cache buffer).

Now we have the full vision of the kernel bug exploited by the user-space POC.

Using REVEN and the Axion GUI on a kernel race-condition case has proven to be quite useful, as its non-intrusive way of working doesn’t alter the analyzed system behavior. It allows an analyst to quickly browse the execution trace from the end to the beginning (time-travel and backward analysis). Thanks to Axion unique features, the analyst can then find points of interest and understand what is going on.

Using REVEN and Axion, an experienced user with strong low-level skills can reverse such a trace in about 7 minutes.