Analyzing CVE-2020-15999 with REVEN: Buffer-overflow in libpng in Chrome

In this article, we will present a step-by-step analysis of an exploit for CVE-2020-15999 using REVEN. CVE-2020-15999 is a heap buffer overflow in Freetype allowing a remote attacker to potentially exploit heap corruption via a crafted HTML page. In the process, we will show how REVEN’s timeless features such as Symbol call Search, Memory History and backward Taint can be combined to build a root-cause analysis.

Recording of the scenario

The record was done manually, using this exploit. From REVEN’s Project Manager, it was started after entering the URL of the exploit file and stopped when Chrome reported that the tab crashed.

The resulting trace for this scenario contains ~ 3 billion instructions, with certainly some overhead (exception management from the OS and Chrome) due to the fact that we chose a manual recording approach. We could have optimized our recording approach using some ASM stubs to stop the record earlier in the Chrome executable. In this case, we felt this was not necessary since the analysis went smoothly.

Detection of the crash

As Chrome is “catching” the crashes of each of its tabs to display that the tab crashed to the user we should look at the symbol KiUserExceptionDispatch in ntdll.dll.

From there (as there is only one), we can see what is causing the exception by moving to the corresponding exception (using the REVEN % shortcut on the previous iretq) and it’s a pagefault.

Detection of the buffer overflow

Where is this address passed to cr_png_combine_row coming from?

If we taint the adress backward to see where the argument 0x20dd33e10a0 of cr_png_combine_row is coming from, we reach this transition inside a loop: 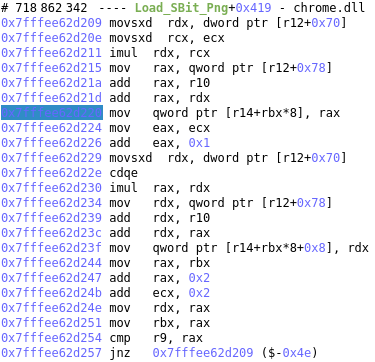 Something must be wrong in here as 0x20dd33e10a0 is pointing to a value that isn’t related to the png.

If we look at the loop:

The loops make perfect sense if the field at 0x70 is the pitch of the image (width * number of components per pixel) as computing the address of one row will give us: buffer + i * image_pitch with i from 0 to the image height. With that, we still don’t know where r10 is coming from but it’s probably an offset in the buffer or something like that.

As the loop looks logical and I don’t see anything wrong with the breaking condition we have two possibilities to explain what is going wrong:

Are image_height and/or image_pitch too big?

If we taint the pitch (tainting [r12 + 0x70]), we directly reach an IHDR header with the width being partially tainted. 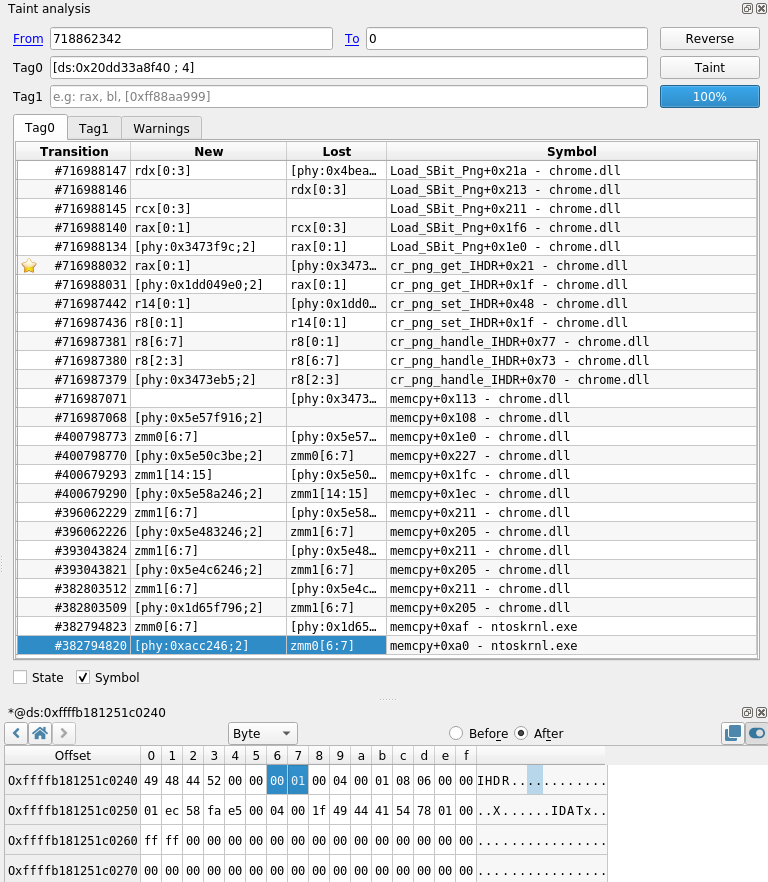 The IHDR header is being copied from a buffer inside a NtReadFile (looks like the header is coming from our font file).

If we look at the values in this header we have:

With these values, from the png documentation, each pixel should have four components (RGBA) with a size of 8 bits each, meaning that the pitch should be 4 bytes which proves that image_pitch is correct.

Looks like neither image_height nor image_pitch are too big in the loop.

Is the image buffer too small?

If we taint the address of the buffer (tainting [r12 + 0x78]) we can see that it is coming from the return value of a malloc. 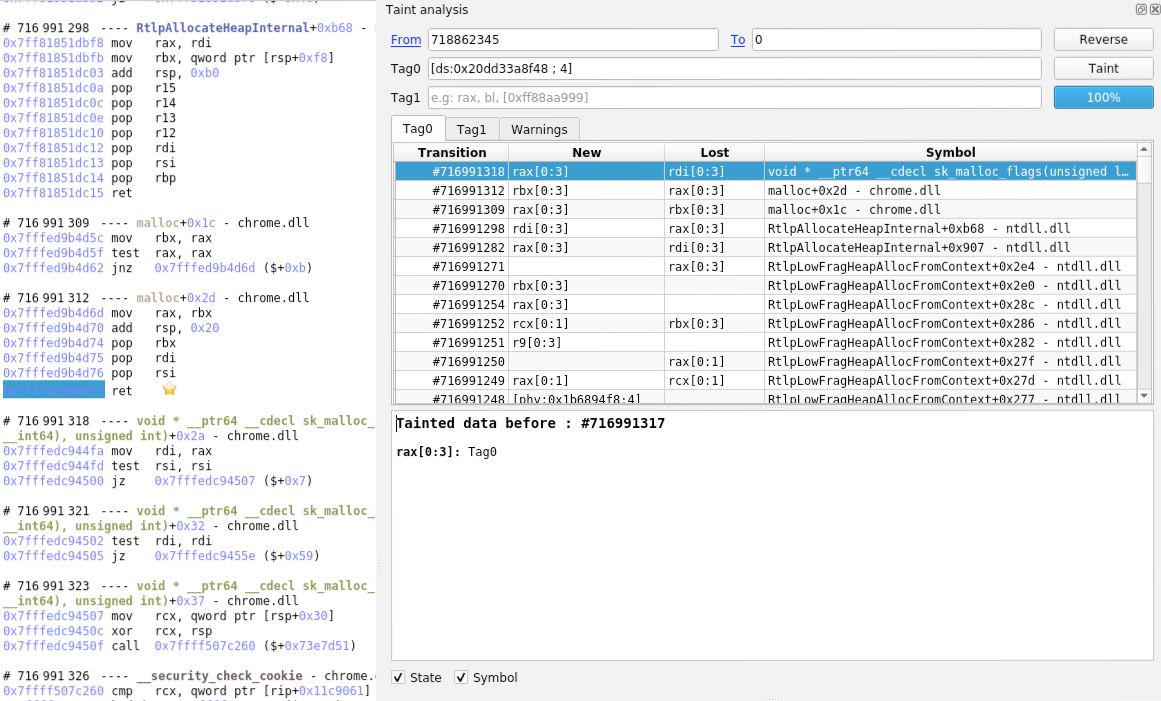 Where does the size of the image buffer come from?

If we taint backward the size (rcx at the call of malloc), we can see that, at the end, the width and the height are partially tainted in the IHDR header. 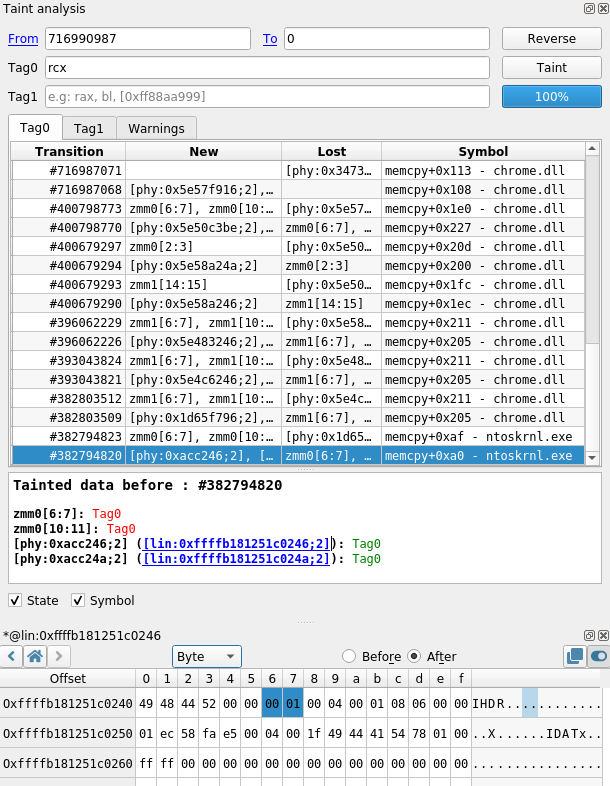 So, somewhere in the code we probably have an integer truncation from 4 bytes to 2 bytes. By looking for more details in the taint, we can see where we transition from 4-byte values to 2-byte values. 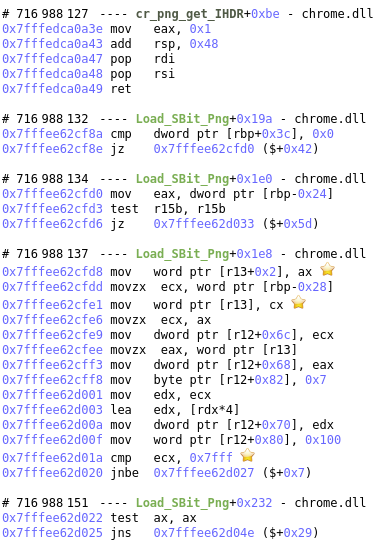 The IHDR header is read in png_get_IHDR and it was called with &imgWidth = rbp - 0x24 and &imgHeight = rbp - 0x28 but as you can see in this assembly code, only the two least significant bytes of each are written in a structure pointed to by r13. Following the taint, we can see that this structure’s fields are transferred to another structure (containing the height and the pitch) and that’s it’s the one used when computing the size just before the call to ft_glyphslot_alloc_bitmap which will allocate the buffer with a wrong size.

We can also see that the program is doing a check on the truncated value to see if they aren’t above 0x7FFF (this is the fix for CVE-2014-9665) but as the check is only done on the truncated values, it won’t fail, except if the values are between 0xF000 and 0xFFFF but not above those limits. The proposed fix is to move this check before the integer truncation.

In the above analysis using REVEN, we tracked the root cause of an exception in Chrome caused by an exploit of CVE-2020-15999. With Timeless Debugging and Analysis, we went from a pagefault, to potentially faulty arguments passed to a function, to the very section of a file triggering the bug in the code. This is another example which demonstrates the capabilities of the Taint feature in REVEN and what results you will be able to achieve with it.