Ever wondered how you could integrate REVEN with your fuzzing pipeline, to automatically record the crashes you find and have them ready for analysis without manual intervention? Fear not, this is actually very easy thanks to the automatic recording API provided by REVEN Enterprise and a small piece of Python! Part of the analysis itself could also be automated for triage, filtering or having a report ready for the analyst. This aspect is not covered in this article (look at this demo if interested).

The following figure illustrates the setup: 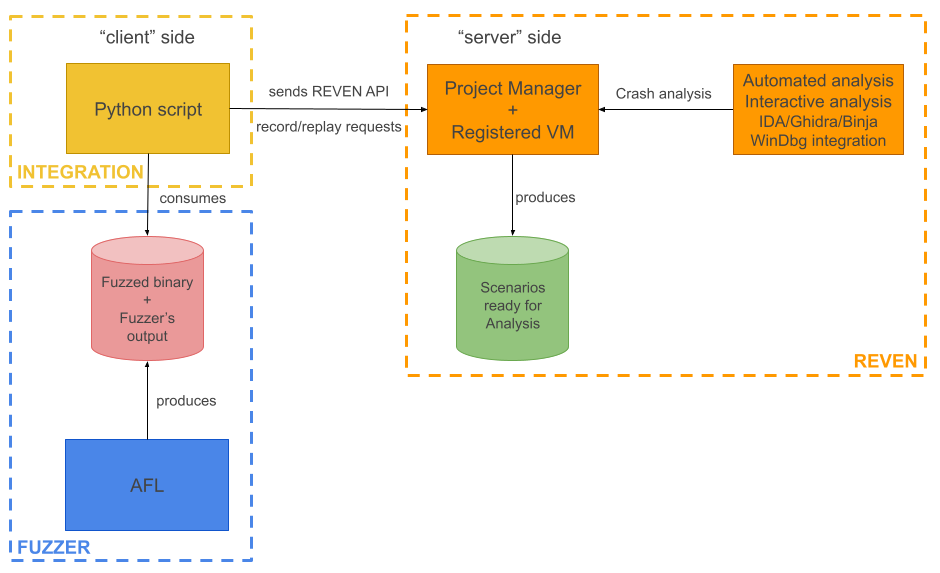 Gluing both worlds, fuzzer and REVEN

As you probably already know if you are into fuzzing, AFL and other fuzzers produce an output folder with all the inputs that generated a crash. It is this output folder that we will use to automatically record a scenario per crash.

The automatic-post-fuzzer-recorder.py script currently does the job of recording multiple scenarios automatically on a REVEN Project Manager.

It will take as input a binary and a corpus of files, that typically is a fuzzer’s output, and will record one scenario per corpus file, feeding the binary with the corpus file name as first argument. Once a record is done, the corresponding replay is launched, and the next record will be performed. Between each record, the VM’s live snapshot will be restored.

Every scenario is named with the prefix given in argument, the binary name, and the corpus file name. If a scenario with the same name already exists, this script will exit, meaning you won’t overwrite your existing scenarios by re-running it a second time. Also, this script will not “listen” to the directory, meaning it is not suitable for running during the fuzzer’s execution, but rather after its termination.

From this version, it should be quite straightforward to adapt the script for some other use cases that better fit your needs.

Let’s dive a bit into its usage.

Running this with three files in the corpus returns the following output:

As you can see at the end of the output, a created_scenarios.json file provides a complete summary of the scenarios that were recorded.

It can be used to launch analysis scripts on those scenarios, such as specific reports (crash detection for example) or vulnerability detection.

Some thoughts on performance

My machine has an Intel i5-8500 CPU, 16 GB of RAM, and all the REVEN-related data for this are stored on a SATA-connected Samsung 860 EVO SSD.

This run took about one minute to complete, and each replay took about 30 seconds each. The used binary does little more than opening the input file and sometimes failing depending on the content, which gives us a good estimation of the speed of the whole process without too much overhead from the scenario itself.

Most of the time here was spent in the reloading of the VM snapshot and getting the autorecorder ready.

This simple setup can work great for simple cases as the one presented above, but of course there is room for improvements. Here are a few ideas:

As this setup mainly relies on Python, a lot can be imagined and done, even in the most complicated setup!

This article demonstrated how REVEN can be integrated inside a fuzzing toolchain to automatically generate timeless analysis scenarios for the chain’s outputs. This scenarios can then be further analyzed, still automatically with the Python API or manually using Axion or even Windbg for Windows scenarios.

If this article resonates with some of your needs or if you have questions about the implementation, feel free to contact support.