Who corrupted the data! Get a fast and precise answer with the taint

In vulnerability analysis a frequent question that needs answering is: “who corrupted this data?”.

Timeless Debugging and Analysis (TDnA) systems like REVEN can provide fast and accurate answers to this particular question. For example, the Memory History feature of REVEN allows to see the entire list of accesses to a given memory location, so that the user can find which access caused the corruption. 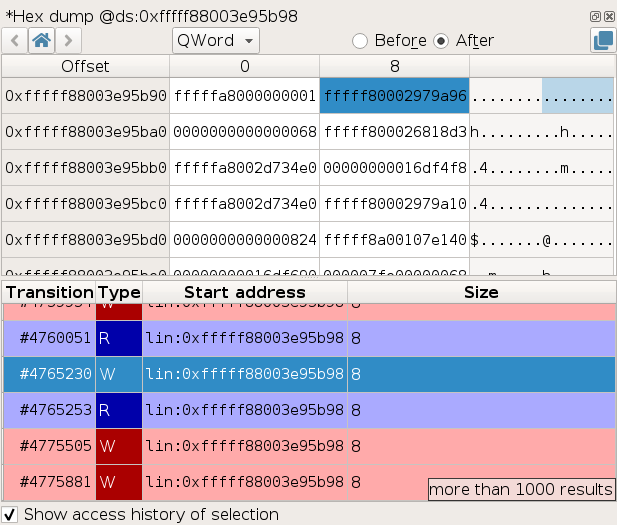 Using REVEN, we can get an even simpler way to find “who” corrupted some data: tainting the corrupted data backward will allow us to go back to the input buffer that caused the corruption, without ever having to manually look for memcopies or manipulations of the data in CPU registers. Using the taint is not only simpler and faster, it also leaves less room for error than the manual way as it is more systematic.

The taint is one of the favorite feature of our users and alledgedly the most powerful one in REVEN, with use cases such as instantaneously going back from a crash to the input file causing it. Its implementation represents several man-years of effort and relies heavily on the timeless nature of REVEN, for allowing backward taint analysis as well as for important performance optimizations.

This article gives an overview of the taint feature in REVEN, and also provides some insight as to how it works under the hood.

Taint analysis works by marking some inputs as tainted, and then propagating this information, by applying a propagation semantics to the instructions manipulating the tainted data. The output of the algorithm is a list of the instructions where the tainted state of some data changed, or where tainted data was used (useful for “slicing” a program according to some tainted data). In REVEN, the taint performs data flow propagation, the inputs can be x86_64 registers and ranges of memory, and the propagation direction can be either forward or backward.

Forward taint is answering the question: “in the future, what registers and memory locations have their value depend on the initial tainted data?”, while backward taint is more like answering the question “where does the value in this location come from in the past?”, with the end of the output list typically containing the origin of the input data, such as the input buffer or file that caused the corruption.

The remainder of this section provides some simple examples of taint propagation.

For memory accesses, the dereferenced address is resolved to its runtime address, here ds:0xfffff80002802cd0. The corresponding range of 8 bytes becomes tainted after the addition which makes it depend on both its initial value and on rax.

Then, the second instruction taints ebx from the 4 last tainted bytes of the range [ds:0xfffff80002802cd0 ; 8]. Note that the taint in REVEN is able to track taint state at the byte level.

The first thing to notice in backward is that we start propagation from the final instruction, and go back up to the first.

Second, the propagation rules are a bit different as in forward, as in the instruction mov rax, rbx, rax takes its value from rbx. That means that the value of rax after propagating through this instruction depends solely on the value of rbx, which is why rbx becomes tainted and rax loses the taint.

OK, this gives us a basic understanding of what taint propagation is like, now, how do we implement such an algorithm so that it can run on real x86 instruction traces of several billions of instructions? Let’s find out…

Taint under the hood

Let’s take a look at the big picture first. The taint algorithm can be split in 3 main steps, described below:

What does the propagation algorithm look like? Before answering this question, let’s take a detour through the LLVM optimization engine.

During the lifting step, we also apply some optimizations to the produced LLVM. This is to improve the accuracy of the propagation. For a simple example of a case where optimization helps, consider the following sequence of instructions:

If these instructions are taken separately, then the propagation algorithm is forced to keep any taint on rax, because it cannot assert that rax == rbx. This results in over-taint, which can cause the taint to report spurious links between data that are actually unrelated.

By lifting with the optimizations enabled, the optimizer is able to recognize that the above is actually semantically equivalent to:

This optimized version allows the taint to successfully remove any taint on rax and avoid over-tainting.

The optimization engine of LLVM is very powerful (it powers the clang compiler) and allows to simplify very complex cases, from which the taint benefits.

Here is a (simplified) example of the propagation algorithm on an LLVM instruction:

In the example above, “markers” are used to indicate which piece of data is tainted. The taint in REVEN actually supports propagating an arbitrary number of markers (although the Axion GUI and the current API in reven2.preview.taint only supports 2 markers), which allows for instance to taint each byte of an input buffer with a different marker in order to determine what part of the tainted data comes from each byte of the input buffer after the propagation.

The example allows forward propagation in a LLVM vector instruction that extracts an element from a vector by indexing it. When the index is constant, we can use it in the taint to propagate only the markers of that precise element of the vector.

However, when the index is a runtime value, the best we can do is propagate the markers of each element in the vector to the produced value. If in reality there are stricter conditions on the index that restricts the value it can take at runtime, then this may produce over-taint. In practice though, this particular cause of over-tainting was not often observed.

Iterating, lifting on x86_64 instructions, and then optimizing and propagating on LLVM instructions are slow, intensive operations. When only memory (no register) is tainted, we can actually do better in REVEN. Using the Memory History in the sequencing step of the taint algorithm, we can request the transition where the tainted memory will be accessed next, and skip lifting the entire portion of the trace up until the tainted memory is accessed. This sometimes allows to skip billions of transitions, and is instrumental in the great performance of the taint.

From the start, validating that the taint gives correct results was a priority of ours. To do so we worked on two avenues:

For (1), we manually crafted more than 230 unit tests, such as the following:

In this example, we test the taint in the forward direction, with rax tainted initially, on a set of instructions starting with xor rbx, rax, and we compare the resulting taint state after each instruction to the expected taint state passed as the last parameter to make_monomarker_taint_by_inst.

We also built integration tests, notably to validate inter-process tainting such as demonstrated in the “tokio-chat” article, where we use the taint to follow messages between a server and clients running locally.

For (2), we equipped the taint with the ability to report warnings to users in various situations, such as when encountering an instruction that we are not able to lift or propagate through just yet.

The warnings can be found in the Warnings tab of the Taint widget, and the ones that occur in the same sequence of transitions as a change to the taint will also be reported with a warning sign in the list of changes in the taint widget.

The list of warnings can also be accessed programatically through the API for scripting purposes.

Building applications on the taint

The taint provided by REVEN offers an API, that can be used as a building block for building more advanced algorithms.

The taint in REVEN can be used both to directly analyze vulnerabilities faster or to implement higher level algorithms such as UAF or BoF vulnerability detection.

We look forward to delivering higher value tools to reverse engineers and developers with the taint and other exciting upcoming features in REVEN (who said “a call tree view”?)!

In particular, for the taint, there are at least two directions that we could pursue to bring the feature to the next level:

Thank you for reading this article! What would you like to do with a taint such as REVEN’s?